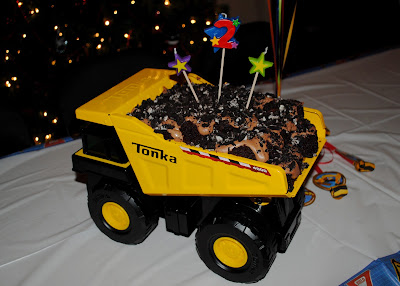 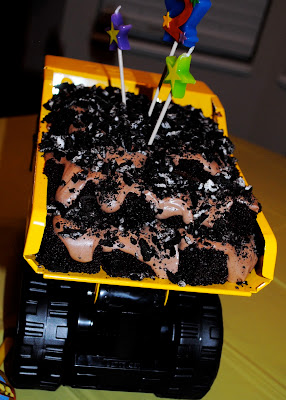 My little boy had a birthday the week before Christmas.  I was practically nine months pregnant, and I was looking for something easy.  I saw this dump truck cake idea on the internet.  So much potential,  but the versions I saw looked painful to eat (cubed cake with hershey’s chocolate syrup drizzled on top).  So I decided to come up with my own “Mud Trifle” that would taste yummy and still pull off the muddy dirt look. What a hit!  My two year old LOVED it, and all the other little kids were giggling and laughing about eating “dirt” for dessert.  Well, all except one of my niece’s who needed several reassurances that it was truly NOT dirt before she would touch it. :) We had quite a few guests, so I actually made a second trifle in a pretty trifle bowl… but somehow I didn’t get a picture of it.  A spin on this idea would be to buy each child a small dump truck and put a chocolate cupcake with chocolate frosting and crushed oreos on top in the back of each one.  The small dump trucks would be your party favors.  (I saw some little dump trucks that would work perfectly at Wal-Mart for $3 each).  I wanted to do this, but with Christmas and being mega prego… it just didn’t happen.  :)
PS I had my new baby boy the very next night! 8 lbs 11oz and totally adorable. :) 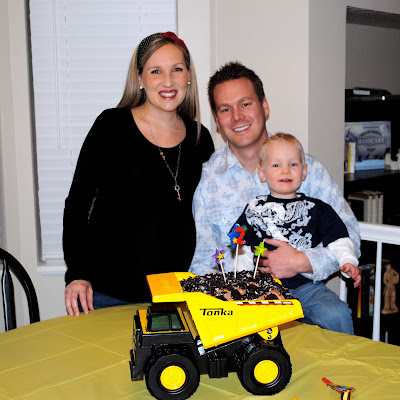 Cube cake into 2 inch pieces.  Whip cream with hand mixer.  You can add 1-2 Tablespoons of powdered sugar if you like things a little sweeter.  Make pudding mix according to directions, then fold in the whipped cream.  Chop the oreos using a kitchen knife, or you could certainly crush them instead.  Layer chocolate cake cubes, pudding mixture, and oreos one at a time to fill the toy dump truck.  I made sure to set each layer back an inch or so from the previous to give the appearance of mounded dirt.  Then I made sure to glob a little of the pudding mixture out over the cake cubes at the back.  I included the picture from the back of the dump truck so you could see what I mean.  Insert the candles and enjoy!