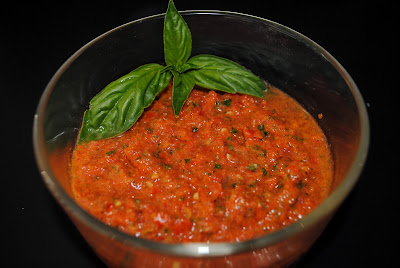 I didn’t have any tomato paste to make pizza sauce a few weeks ago, and I thought…. Man! I have all these garden tomatoes… there has to be a good fresh recipe out there. So I googled it and settled on one I found on allrecipes.com I’ve made it a couple of times now, and turned out fabulous every time. It is a thin, kind of watery pizza sauce, but it packs a lot of flavor so you don’t miss the thickness of traditional sauce. I was wary of the cinnamon the first time, so I only put a small pinch in…. it turned out awesome! Not overpowering, but added another subtle layer of flavor that was fun. The second time I added a couple of shakes of the cinnamon shaker. It was still good, but the cinnamon came through a little bolder and I liked it better as a faint background flavor. So the moral of the story: don’t be afraid of the cinnamon, but only one small shake (or pinch). :) Hope you enjoy!

In a food processor, combine all ingredients: the tomatoes, garlic, basil, cinnamon, salt, pepper, sugar, oregano, oil, and parsley. Blend without liquifying. It should remain a little chunky.

Adapted from Aligorn at Allrecipes.com