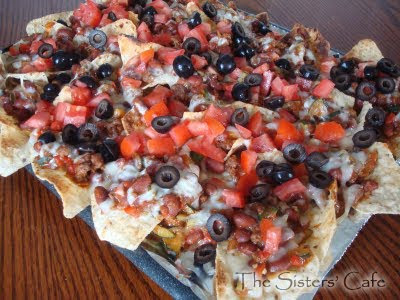 My husband really loves these nachos. I think they are pretty great, too! I got the recipe from Betty Crocker’s Quick and Easy Cookbook and made my own revisions. It’s titled Skillet Nachos, because after making the topping in the skillet, you are supposed to wipe it clean and then layer the chips, topping, and cheese in the skillet, put on the lid and heat until melted. But I think it’s easier just to arrange it all on a broiler pan and broil it instead. Anyway, it’s your choice!

Sometimes I add ground beef to make it a heartier dinner for the family. You can omit it if you want to make it as a snack or appetizer. I included the amounts the cookbook used, but I never measure. This is a throw-together kind of meal for me. Enjoy!
Skillet Nachos
Submitted by Erin ~ The Sisters Cafe
½ lb ground beef
1 medium green bell pepper, chopped (1 cup)
1 small zucchini, chopped (1 cup)
1 cup chili beans in chili sauce (from 15-oz can)
1 cup thick-and-chunky salsa, divided
Tortilla chips (the salted kind, of course!)
1 ½ c. shredded Monterrey Jack cheese (6 oz)
sliced ripe olives
diced fresh tomatoes
Brown ground beef. Drain and remove ground beef to a plate; set aside. Using the same pan, stir-fry bell pepper and zucchini for 2 minutes, or until crisp-tender. Stir in chili beans and ½ cup of the salsa; cook until hot. Stir in ground beef.
Line tortilla chips on a broiler safe pan. Spoon dollops of the mixture atop the chips. (Sometimes I don’t use all the mixture, so I end up making another half pan of nachos when these are eaten.) Sprinkle with olives and tomatoes (or you can add these after the nachos come out of the broiler). Sprinkle with cheese, to your liking. Put under broiler (not super close) until cheese is melted, only a couple of minutes.
Serve with remaining salsa.