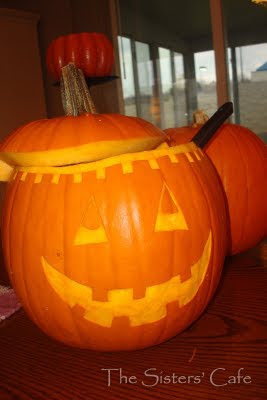 posted by Erin
Happy Halloween!
Even though it is too late for anyone to actually use these ideas this year, I thought I would share my Halloween traditions! Every year I make a creamy soup and serve it in a hallowed out pumpkin (just like Mom used to!). I like to carve a face in the pumpkin for fun. This year I served Potato Pepperjack Soup out of our pumpkin bowl, and it was delish! Another great idea that I was considering making was Chicken Corn Chowder, but any soup would be fun and yummy. I usually make our Grandma’s homemade French Bread to go alongside, but this year I thought my four year old would appreciate munching on some witches fingers! :) 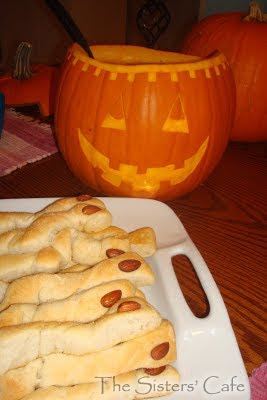 I made a double batch of the breadsticks and used half of the dough for the witches fingers (just added a raw almond to the ends) and the other half I brought to our Halloween party along with some marinara sauce (below). Together they were ‘bones and blood!’ Thanks to my sis Melanie for the cute idea. :) After dinner I emptied out the leftover soup from our pumpkin bowl and cleaned it out and then filled it up with lots of breadsticks. When it was full it looked like silly hair coming out of the pumpkin. :) (I forgot to take a picture until the ‘bones’ were mostly eaten and all the ‘blood’ was gone.) 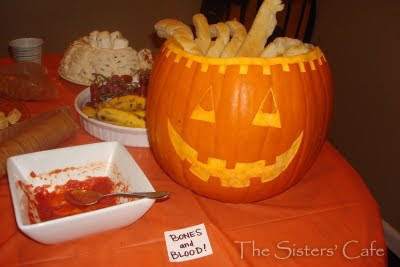 I hope everyone had a Happy Halloween! What are some of your favorite Halloween food traditions??

What a FUN holiday meal!! I love the idea of carving the individual soup pumpkins.

Erin that turned out so cute!!! I loved your pumpkin bowl–you are very artistic!! I made soup this year too–but i just swerved it out of a regular soup tureen. I will do it your way next year–so much more Halloweenie:)

HOW CUTE… And what a great idea!

I loved the face on your pumpkin – that was darling! What a good idea. I never considered doing a whole face of just carving the skin – I love it!! I was going to do a soup in a pumpkin too but decided on Jack O Lantern pizza like Mom always used to make. It was fun!

Your pumpkin is adorable! I love the face you carved. It reminds me of the soup mom always served on Halloween in a pumpkin. Of course, she used to use magic marker to draw a face on the pumpkin. Your is darling though! Mom did the Bones and Blood for our Halloween dinner this year, too. And we had "Bubo Tuber Pus" (which was guacamole). She had cockroach clusters (chocolate covered almonds)… and all sorts of other good things. I'm happy to see all of Mom's traditions mixed with new ones in our families now. It is so fun!

I made the soup and it was great! A lot of calories but I guess that's what makes it yummy. I LOVE LOVE LOVE your grandma's french bread recipe! My brother thought it was store bought when I made it. I have a question, how do you freeze it? Do you do all the steps but don't let it rise that final time after you roll it together? Then after you freeze it how long do you have to set it out for it to rise enough to bake?

Hey Jamie! I'm so glad you liked the French Bread. Mmm, isn't it great? I reread the original post to see what you were referring to when you asked about the freezing. I actually have never frozen it before. Maybe one of my sisters has tried freezing it before…. in which case I defer your question to one of them! I know our Grandma freezes it, and I've just assumed that it's already baked when she puts it in the freezer. But I've never frozen it. Sorry I'm not more help!