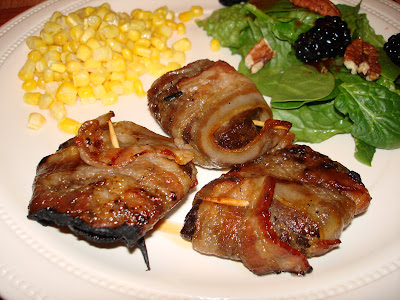 My husband and I, along with our fathers and brothers, really enjoy hunting.  As a result, I have a freezer full of deer, elk, and moose.  We like to eat it, especialy since it is so lean and healthy.  So I am always on the lookout for good recipes for all this wild game.  I found this one on RecipeZaar by TCSmoooth, and it is awesome!  In fact, I think even those who don’t like wild game will be asking for seconds when they try this.  I used whitetail deer this time, but it would be great with elk, moose, pork or beef.

Sweet Bacon-Wrapped Venison Tenderloin
Subitted by Mindy
2 lbs venison (or other) tenderloin
1/2 lb bacon (Plain, thin-sliced is best)
3 cups dark brown sugar
2 cups soy sauce (regular, NOT low-sodium.  You’ll want the saltiness)
1/4 cup white sugar (optional for added sweetness)
Mix brown sugar and soy sauce together in a bowl.  Marinate in mixture for at least 3 hrs or overnight in the fridge.  After marinating, place on a slotted baking sheet with a drip pan or aluminum foil below to catch the drippings.  Do not dispose of the remaining marinade.  Wrap a piece of bacon around the end of the tenderloin, securing the bacon strip with a toothpick.  Repeat this process until the entire loin is wrapped in ten or so bacon “loops”.  (I had my tenderloin pre-cut into steaks, so I just wrapped each one individually in a slice of bacon).  Drizzle the remaining marinade over the loin.  You can retain a portion to continue to baste throughout the cooking process if desired (I did this).  Place on center rack in over and bake at 350F for 25-30 minutes.  (I actually cut the recipe in half this time, and I cut the cooking time to 20 minutes which cooked the meat to about Medium).  Remove loin from oven and place directly on a grill over medium-high heat to sear the bacon and outer loin. (Another option is to continue baking in oven for 5-10 minutes.  With 10 minutes left, lightly dust the top of the loin with white sugar creating a sweet crust on top of the bacon.  Personally I think this would be too sweet, but I haven’t tried it).  Before serving, cut the loin between each strip of bacon so that each piece of meat has it’s own slice of bacon. (Obviously mine look a little different since my tenderloin was pre-cut into steaks).

Oh, that does sound good. Now where can I get some venison around here?… I never thought I’d need to say that! There’s always plenty of elk and deer at home! :)

Reading that makes me hungry for venison! Great blog.

By the way, if you like contests, I have one running this week (and every week) on my blog at http://www.annebradshaw.blogspot.com. The prize this week is a signed copy of Dr. Stan Gardner’s DVD of one of his lectures on the musculoskeletal system, entitled A Pain in the Neck (Back, Joints, and Other Places). This is brand new and not yet in stores. It will sell for $49.97 when available. The lecture is one hour twelve minutes.

THANK YOU! I am going to try it this weekend. We also have a freezer full of venison and antelope. Have you tried this with antelope? Would love any more wild game recipes.
Jen

I haven’t tried it with antelope. You’ll have to let me know what you think. I’ll post some other wild game recipes as I make them. Let me know if YOU have any other great ones, too. :)

Wow – that looks great! Dad is going to give me some elk so I will have a yummy recipe to use it with now!

I tried this recipe with venison and we loved it. I have made many things from your blog and have enjoyed them all. It is hard to find good wild game recipes. SO thank you for sharing. I make your latest bread recipe like once a week. We love it.

I just got an elk last weekend so I tried this out, it was SO good! Keep the venison recipes coming, it seems like they are hard to find. And I love your blog, I reference it ALL the time (along with Melanie’s Kitchen Cafe…). Thanks again!

I am so jealous my wife and I love wild game but we are not hunters and the hunters in the family are now old or gone and we really miss having wild game meat. We just have deer and turkey here but we have eaten elk and would love to try other game. You have our mouth watering with this one.

This sounds great! I’m always looking for more ways to use my freezer full of elk. More game recipes please!

Hey, I am TCSmoooth from RecipepeZaar. I was thrilled to see my recipe on here, and you even gave me credit for it! I’m glad you folks like it. Looks like you used round steaks or something else. If you haven’t used your inner loins with this recipe, you really should try that. I don’t know how familiar you are with processing a deer, but you should get 2 small inner loins from the hind end, and MAN, that’s the best cut for this recipe!

Anyway, I’m flattered you’ve posted this. Let me know if I can help.

Taylor, I tried to link back to your profile, but it isn’t enabled. So I’ll reply here and hope you get it. I LOVE this recipe! Do you have any other good wild game recipes? I’m always on the lookout. My husband actually butchered this whitetail, and he likes steaks… so pretty much everything, including the tenderloin, was cut into them. But it turned out great regardless. Such a good recipe!

Mindy, I have a few more recipes for deer and wild turkey, but I almost hate to post them because if you’ve tried my tenderloin recipe already, then anything else is sure to be a disappointment. I wish I could tell you I’ve got plenty more great ones, but sadly, you’ve already had the best one I’ve got!

I’ll come back here sometime and post another one for you anyway though. Happy Easter.

Wow! This sounds so good. I can't wait to try this one. This is going to be awesome. Thanks a lot for sharing.